Top Tips and a Guide for New Hockey Players 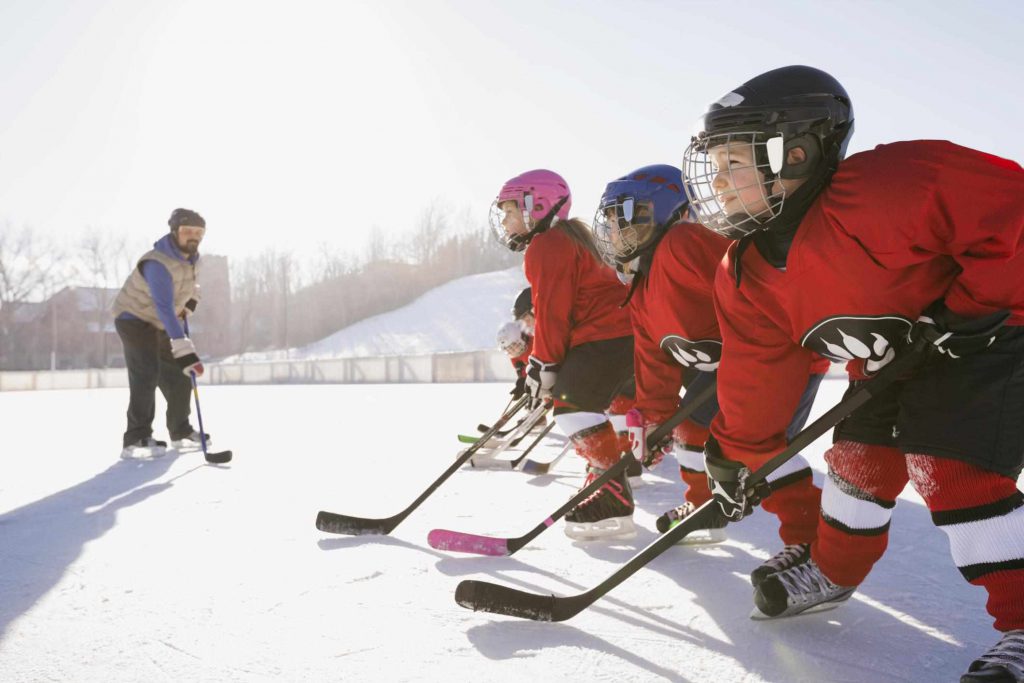 Whether you’re 5 or 50, maybe you’ve got some gear, and maybe you’ve read some things online and watched a few of How to Hockey’s YouTube video’s – here’s a quick 10 point tips and a in-depth Guide to help you, or your child, to get started at playing ice hockey

Equipment – What you should and shouldn’t do

Before stepping onto the ice for the first time, get to know the basics of the game. It may seem completely overwhelming at first, but the game itself is pretty simple.

Do I need skating and hockey lessons?

Yes. It’s simply that. Whether you’re 5 (and that’s amazing that you’re reading this!), the parent of that 5 year old, or 50. You need lessons. Lessons get you started with the basics and help with good habits. Once you’ve learnt some of the basics by being on the ice, knowing the ice and balance, you can then start with some of the 101 basic hockey courses. Just remember, EVERYONE had to learn, from Crosby to Gretzky – no-one was born with skates on (ouch!).

The cost of playing hockey is one of the big issues in the sport, making it difficult for lower-income players to participate. It takes several hundred dollars to get started, once you account for the purchase of equipment, registration with an ice hockey program in your community, and incidental costs. Once you’re interested in the game, then there’s the cost of better protection, better sticks – it’s so easy to have your own hockey store in your garage after 10 years of playing the game!

Many leagues and associations offer programs to help curtail costs, such as equipment rental, second-hand equipment, and starter kits at a reduced price. Contact your local association or inquire with other players/parents.

Registration fees vary widely depending on where you live. Expect to pay at least $300-$700 per player per team per season.

Playing Hockey Is a Commitment

Playing hockey means busy weekends, early mornings, long drives, and cold rinks, particularly if you are registering a child to play the game. The more time you or your child is on the ice, the better the game. You should try our HockeyParents Circle as a great support group for Hockey Parents!

Remember also that being a member of a team is a commitment. Reliability and punctuality are essential. A typical minor hockey program will offer three to five hours per week, divided between games and practices. If you register your child, ask what the schedule will be like and make sure it’s realistic for your lifestyle.

A useful rule of thumb: for every hour of ice time, allow at least another hour for preparation, travel, etc. Adjust that number according to how far you live from the rink.

Find Hockey in Your Community

If you can’t find games via word-of-mouth or online at your local city website? Look for your city on HockeyCircles and put a shout out for a drop-in game!

Hockey stick, hockey skates protective equipment are the essentials of the game.

Make sure the hockey stick is the correct height. With the stick held vertical and the tip of the blade touching the floor, the butt-end should come up to about eye level of a player standing in bare feet, and up to the chin of a player in skates.

Ice hockey requires a safety-certified helmet. The helmet is one item that should probably be purchased new. A properly fitting helmet, certified by safety testing and fitted prior to purchase, could save your life.

Minor hockey programs also require a face mask attached to the helmet. If you’re an adult beginner, the mask might not be required. But it’s a very smart idea to wear one, (that’s from personal experience!)

Fit is important. If you’re purchasing hockey equipment online, try to find the same make and model at a local store so you can be certain of which size to order.

The first priority is safety

It’s not a question of if, but when will you or your child get hurt playing. As you start to play more and more hockey, you’re going faster and faster on slippery ice and razor sharp skates hitting a puck at high speed all with other players doing the same. Some hockey injuries become great stories, some will make you wear a cage, some will stop you from playing the game permanently and, we hate to say this, but some people have died playing the game. However, statistically, it’s more dangerous driving to the rink, than playing the game, so it needs to be kept in perspective.

Making sure your equipment fits properly should be a priority, ill-fitting equipment can distract you, or cause you to trip-over or injure yourself more. Don’t cut a few corners to save a bit of money.

Many minor hockey programs forbid body checking until kids reach a certain age. If you’re checking out a program for a young boy or girl, ask what the policy is on body checking, and make sure you’re comfortable with it.

Good hockey coaches also teach safe hockey, discouraging dangerous offenses like checking from behind and hits to the head.

Respect the Game and Everyone at the Rink

A good hockey player shows respect for officials, coaches, and opponents, learns to accept frustration and defeat, and is gracious in victory. Teamwork, communication, support, and respect are just as important to playing hockey as skates and pucks.

If you’re the parent of a hockey player, encourage all of the above, and practice what you preach. When you’re starting out or playing in rec leagues, there’s no NHL scouts watching you or your kid, you’re not going to have commentators lauding your check from behind. Play like you would like to be played against, and parents, show your kid how to be a responsible parent with a love of the game and knowledge that sometimes, things don’t always go your way.