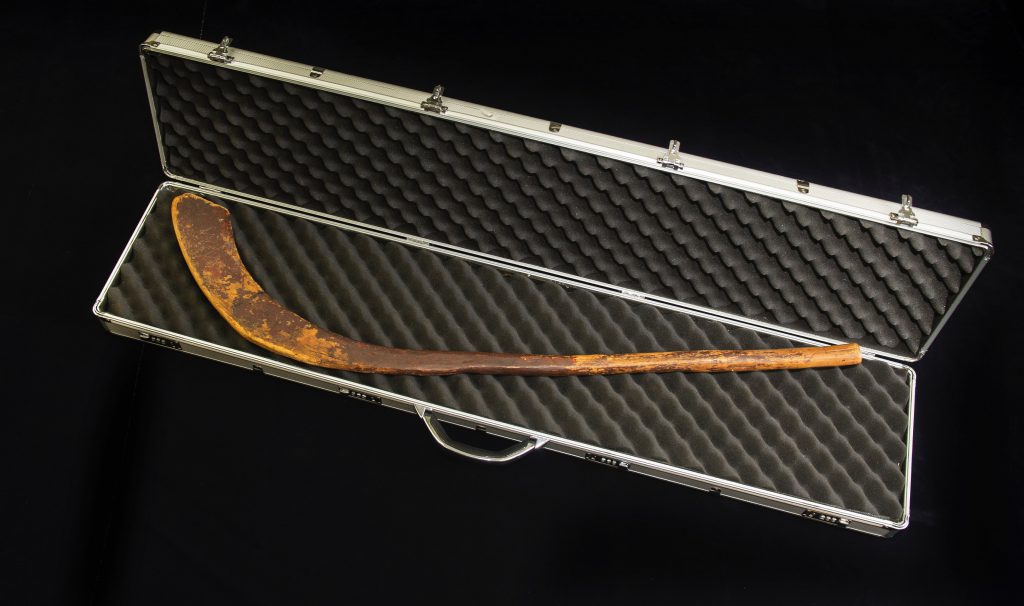 When he bought an ancient stick with a curved blade for $1,000 in 2008 from a barber in North Sydney, N.S., Mark Presley had no idea he’d acquired the world’s oldest hockey stick.

He wasn’t even certain the object was a hockey stick. “But it was interesting and it was different,” Presley said Friday at the Canadian Museum of History in Gatineau. “It really was almost a curiosity. I didn’t expect much beyond that.”

The museum announced Friday it had acquired the ‘Moffatt stick’ from Presley for $300,000. Research has established that a member of the Moffatt family handcrafted it from a single piece of sugar maple between 1835 and 1838 in Cape Breton.

“Hockey is Canada’s game,” said Mark O’Neill, the museum’s president and CEO. “We developed it and we cherish it like no other country in the world. The Moffatt stick is a unique and powerful link to the sport’s earliest days in this country.”

Presley brought the short-handled, long-bladed stick to Ottawa Thursday in a long silver case and handed it over to museum officials. It will go on display in the museum’s new history hall when it opens to the public on July 1, 2017.

The stick was a Moffatt family heirloom until the early 1980s, when the late Charlie Moffatt gave it to North Sydney barber George Ferneough, who displayed it for more than 25 years, perched atop a sled, on a wall in his barbershop.

It’s just over a metre long and weighs precisely 793.8 grams. Its curved blade varies in width from 3.5 centimetres to 8.5 centimetres and bears the carved initials “WM,” believed to represent William “Dilly” Moffatt, who was born in 1829 and was the elder brother of Charlie Moffatt’s grandfather.

Charlie Moffatt’s father and grandfather are thought to have played hockey with it on nearby Pottle Lake.

Presley, who was born in Ottawa and learned to skate on the Rideau Canal, first heard of the stick from his father-in-law after moving to Nova Scotia in 2000.

“We were talking old-time hockey one day and he said, ‘If you ever want to see an old stick, you should have a look at the barbershop in North Sydney,’” said Presley, a 47-year-old social worker.

Presley stopped by the barbershop soon thereafter. But it wasn’t until 2008 that he returned for a second look.

As it happened, Ferneough was about to retire and had cleared most of the bric-a-brac from his shop. But the stick was still on the wall.

Even so, Presley nearly walked away. He had his hand on the doorknob, about to leave, when he impulsively asked the barber whether he’d consider selling the stick.

“We bantered back and forth for a little bit,” Presley recounted, before settling on a price of $1,000. “In my mind, the money was half for the stick and half for the story.”

Presley said it took him a week to muster the courage to tell his wife what he had paid for “this old chunk of wood.”

He had no idea of its potential value. When his wife asked him what he thought the stick might be worth, Presley replied that in 10 or 15 years, “maybe it would be a $10,000 object.”

That was before he knew how old it was. Now, he says, “Honestly, it’s a priceless object. There really isn’t a finer slice of Canadiana than this stick.”

After he bought the stick, learning about its background and value became something of an obsession, Presley admitted.

He met with Charlie Moffatt, then 92, and heard his stories about the stick. “To be able to have that first-hand account, it was really just miraculous.”

He enlisted researchers at Mount Allison University in Sackville, N.B., who used tree-ring aging to determine its age. Further scientific tests, including some by the museum’s own conservation department, have since confirmed those findings.

“Putting together all those scientific analyses, we were able to make the acquisition with confidence,” said curator Jennifer Anderson.

The stick was created around the time the game of hockey was developing, Anderson said. It may have been made for hurley, a precursor of hockey played on ice with sticks, she said.

In 2001, another hockey stick, carved around 1852 and known as the Rutherford stick, reportedly sold on eBay for $2.2 million. That led to speculation the Moffatt stick might be similarly valuable.

But the sale of the Rutherford stick has never been verified, Presley said. “That tempered those delusions of grandeur in terms of the value.”

That didn’t stop barber Ferneough from telling the CBC in 2011 he felt ripped off. “I think I should get a little cut,” he said at the time.

Asked about that Friday, Presley said was sympathetic to Ferneough. “I’m a human being. I understand his misgivings.” But, he noted, all the work that established the stick’s age and history occurred after Ferneough sold it.

The museum began negotiations with Presley last summer, after he twice put the stick up for auction on eBay, receiving offers as high as $100,000.

“We were aware of the stick for some time,” O’Neill said. “Negotiations went back and forth.” They struck a deal in late December.

O’Neill believes the museum got a good deal. “Three hundred thousand dollars is a reasonable price for such an important artefact,” he said. “Frankly, Mark’s done very well and the museum’s done very well on behalf of Canadians.”

Presley said the negotiation was about more than just price. The history museum, he said, “was the place the stick needed to be.

“This isn’t going to be one of those objects that’s put on display, has that light on it, and nothing else happens. It will be something more vibrant than that,” he said.

“I’m happy to have drawn the curtain, but there’s a lot more that can happen with this stick. It will provide us with some real insight into the roots of our game.”

The money offers added security for Presley, a self-described “regular guy.” But it will also help him reinvent himself.

Presley, you see, has become “very smitten” with culture and heritage. He’s taking courses from Athabasca University online, aiming for a masters in heritage resource management. The money he received for the stick makes that ambition much more practical.

An ancient hockey stick could change Mark Presley’s life in more ways than one.