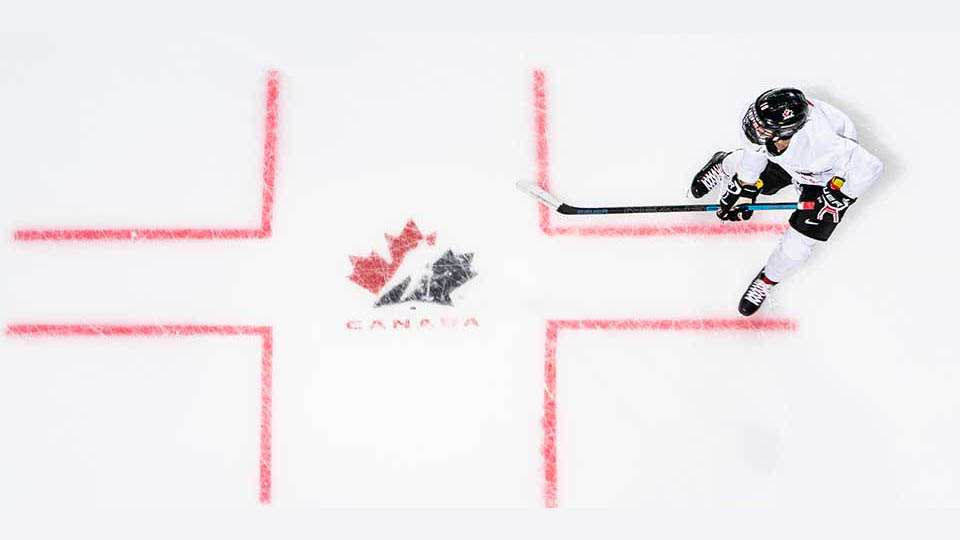 The New Offside: We’re introducing the hybrid offside to create larger attacking zones while retaining the neutral zone for transition and stretch passes. How does it work? In order to gain the attacking zone, the blue-line remains as the line of entry for the purposes of the offside rule.
Once the line has been gained and possession has been established, the red line now becomes the clearance line. Until the defending team clears the puck past the red line, the puck remains in the attacking zone.
Face-off Adjustments: All face-offs will take place at one of the four (4) face-off dots located closest to the crease, or the centre-ice face-off dot in the case of the start of a period, goal scored, offside, or any other need for a neutral zone face-off. None of the four dots adjacent to the blue-line will be used at this time.
Any of the players not taking the face-off will need to line up at least two (2) metres apart, outside of the face-off circle. No player shall be permitted to enter the face-off circle until the puck has left the circle.
Furthermore, the two (2) participants taking the face-off will only permitted to use their stick to gain possession of the puck, or direct it out of the face-off circle
In the event of any encroachment by players into the face-off circle, or a scenario where the centre uses any other part of their body to direct the puck, the play shall be blown down and the face-off will subsequently be re-done. In the event of continued breaches, the referee shall be permitted to issue a discretionary delay of game penalty.

Penalties: Any penalty that’s called will result in the player serving the infraction in the penalty box, unless: (1) If another player is already serving an infraction in the penalty box, the second infraction and beyond will result in penalty shots being issued as there can never be two (2) players in the same penalty box at the same time; or (2) a major penalty is assessed, at which point the player would be ejected and another player from the team will be required to serve the infraction.
Penalty Shots: In the event that an infraction is required to be served through the issuance of penalty shots, the following scenarios shall apply with penalty shots initiated from centre-ice: (Two-Minute Infraction) one (1) penalty shot; (Four-Minute Infraction) two (2) penalty shots; (Major Penalty) two (2) penalty shots and a game ejection to the penalized player
Shooter: The player who is the victim of an infraction will be required to take the penalty shot(s). An alternate may be selected only in the event of injury, or an infraction not against another skater (e.g. Goaltender Interference, Too Many Men on the Ice)
Fighting: If a player(s) drops their glove(s) and continues an altercation, an automatic game ejection shall be assessed. Any player(s) that is assessed a fighting major in any division will be subject to a suspension for the balance of the season, including playoffs, subject to location variance.
Body Contact: Any intentional body contact that results from a player not playing the puck with their stick will result in a four-minute body contact infraction being issued.
Crease Violation: Any instance of a player intentionally entering the opposing team’s crease will result in a goaltender interference infraction being issued
Penalty Thresholds: Players will be ejected from the game if they accrue any combination of: (1) Two 4-minute penalties; (2) One 4-minute penalty, and two 2-minute penalties; (3) Three 2-minute penalties; or (4) One 5-minute major penalty.
10-Minute Misconduct: A 10-minute misconduct will result in the player being ejected from the game.
Shootout: If the game is in a draw, there will be a 3 person shootout per side to determine the winner.
MORE NEWS