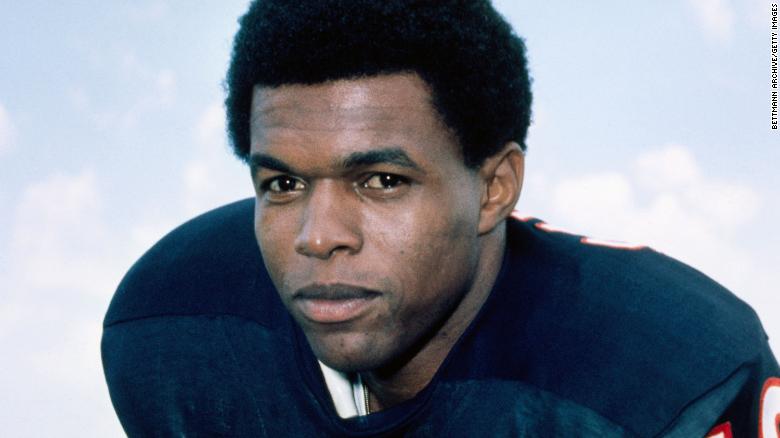 NFL legend Gale Sayers has died at the age of 77.

Widely regarded as one of the greatest running backs to ever carry a football, the former Chicago Bear was inducted into the Pro Football Hall of Fame in 1977.
"The NFL family lost a true friend today with the passing of Gale Sayers. Gale was one of the finest men in NFL history and one of the game's most exciting players," said NFL Commissioner Roger Goodell in a statement Wednesday. "Gale was an electrifying and elusive runner who thrilled fans every time he touched the ball," added Goodell, noting that "we will also forever remember Gale for his inspiration and kindness.&quot;

Sayers earned additional inclusion in the cultural zeitgeist as a central figure in the tear-jerking 1971 film "Brian's Song.&quot; Based upon Sayers' autobiography "I Am Third," the movie details the friendship between Sayers, played by Billy Dee Williams, and teammate Brian Piccolo, portrayed by James Caan, as the latter succumbs to embryonal cell carcinoma at the age of 26.

Sayers' and Piccolo's starkly contrasted backgrounds and personalities made the pair unlikely friends, however the unique bond that developed proved transcendental given the racial barriers that existed in the NFL of the 1960's.

Prior to joining the league in 1965, Sayers was a three-year superstar at the University of Kansas, amassing a Big Eight Conference-record 4,020 all-purpose yards and earning the nickname the "Kansas Comet.&quot;

During his time in Lawrence, Sayers was selected as a first-team All-Big Eight performer three times, and was twice named a College Football All-American, in both 1963 and 1964.
While on campus at Kansas, Sayers was active socially, joining fellow students in the 1964 KU fair housing march, a protest aimed at addressing racial discrimination among fraternities and sororities.
Bears Legacy

At 34, Sayers became the youngest player ever inducted into the Hall of Fame. His short seven-season career was cut short by injuries to both knees, but not before twice leading the league in rushing and earning five first-team All-Pro selections.
An elite athlete buoyed by blazing speed, Sayers was equally as devastating as a kick-returner as he was out of the backfield, tallying more than 3,000 return yards and eight return TD's.
Selected to four Pro Bowl squads, Sayers was named MVP of the league's all-star game three times, joining quarterback Johnny Unitas as the only players to win three Pro Bowl MVP awards.
Limited by injuries during his final two NFL campaigns, Sayers' 4,956 rushing yards and 39 rushing TD's came mostly during the five seasons from 1965-1969. Iconic Bears head coach George Halas presented Sayers for his Hall of Fame induction in 1977, saying of the runner "if you want to see perfection as a running back, you best get a hold of a film of Gale Sayers. He was poetry in motion. His like will never be seen again.&quot;

Sayers' jersey numbers at Kansas (48) and with the Bears (40) have both been retired by the respective programs. Named to the NFL's 75th Anniversary Team in 1994, the former first round draft pick is the only athlete to earn inclusion at multiple positions, being recognized for both his prowess as a running back and returner.

Sayers suffered from dementia during the final years of his life, a condition his widow Ardythe attributed to his profession.

"It wasn't so much getting hit in the head," she said of what a Mayo Clinic doctor confirmed to her in 2017. "It's just the shaking of the brain when they took him down with the force they play the game in.&quot;